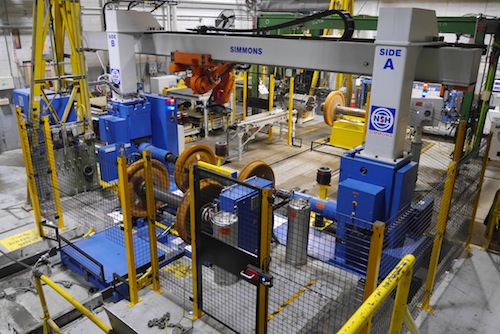 Automated manufacturing processes use intervention that is more robotic and involves less human intervention. Automation ideas have been in existence for thousands of years. In the 9th century, a book created from an accumulation of thoughts and texts, and called “The Science of Ingenious Mechanisms.” This book, in collaboration with the Renaissance period, caused many scientists to come up with some of the earliest automation.

Fast forward, hundreds of years later, robots have become part and parcel of the manufacturing industry. There are many reasons why manufacturers choose to automate their processes, among them, being:

Manufacturing  automation improves the rate of production and productivity of labor. For every hour of labor input, there is higher output. Robots can work faster and with more precision than their human counterparts can. They can work continuously without taking any breaks or getting tired. This allows human workers to get ample rest time and to be more productive.

With the ever-increasing cost of labor, investing in automation seems like the best avenue for most manufacturing companies. However, this does not mean that human input is not needed. Collaborative robots work alongside their human counterparts to supplement the human effort. Cobots are designed in a way that senses when humans are nearby and stop, therefore minimizing any injuries. This way, humans can concentrate on less labor-intensive tasks and focusing on tasks that require human input, such as managerial roles.

Some countries suffer from a significant labor shortage, and the use of automation comes in very handy. Human labor, even in normal circumstances is vulnerable to fluctuations. Some people do not turn up, some call in sick; some have family emergencies, etc. Finding labor at short notice is a challenge, and this is where robots come in. They are capable of being programmed to work in any department to counter the labor shortage.

Reduction or Elimination of Routine Tasks

Automation takes care of routine tasks that can get boring, tedious or fatiguing for the staff. Automating these tasks improves working conditions and boosts morale. Robots are typically assigned such repetitive tasks that might take an emotional or physical toll on workers.

Automation of certain operations, and removing the workers from the direct manufacturing process to supervising, improve on safety. The well-being and safety of workers is a global objective. Robots are assigned tasks that are dangerous or dirty, while humans monitor and complement the robots’ efforts. The collaborative robots (cobots) have in-built sensors that sense human presence and stop, which is a significant safety feature.

Manufacturing automation improves the production rate and product quality. Robots perform the manufacturing process with higher precision and better uniformity in regards to specifications of quality. With automation, there is a more significant reduction or elimination of defect rates.

Automation goes a long way in reducing the time between a customer order and the delivery of the product. This allows the manufacturer to gain a competitive edge for orders in the future. Reducing the manufacture lead-time means the work-in-process inventory is also reduced.

To Carry Out Processes That Are Not Manually Possible

Carrying out some operations is impossible without automation. The manufacturing processes need miniaturization, precision or delicate and intricate geometry that is not manually possible. These include some fabricated actions or rapid prototypes that require the use of computer graphics.

To Avoid the High Costs of Lack of Automation

Automation gives a manufacturer an advantage in many ways. The benefits of automation are often in less obvious ways such as better quality, better labor relations, higher sales and a better image of the company. Manufacturers who do not automate are more likely to face a competitive disadvantage with clients, the public and even their employees.

Automation will become a necessity in the future. Some quarters may argue that this will eliminate jobs for humans, but no machine can completely take over the human brain yet. Some may say that AI will supersede the human mind, but that remains to be seen. In the meantime, robots continue to make work easier and work alongside human workers.